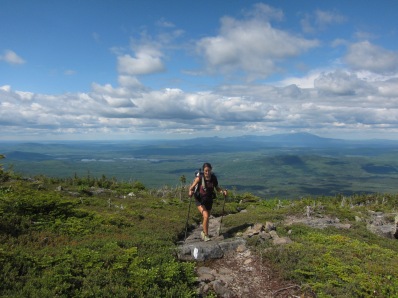 Virginia tops out on White Cap, with Mount Katahdin visible in the background.

Virginia and I were in the middle of the 100 Mile Wilderness; a swath of land in Northern Maine that encompasses everything from Abol Bridge to Monson, and for a fresh southbound (SOBO) Appalachian Trail thru-hiker, it’s the start of your 2,185 mile journey.  During the 100 Mile, there is no resupply or early exit options for, you guessed it, 100 miles, and the hunger we had developed during our transcontinental bike tour just months before had returned with a ferocious vengeance.  We dreamt out loud of these normally ordinary foodstuffs as we sloshed, forded, scrambled, crawled, climbed and limped our way through these respective bogs, rivers, roots, boulders and mountains; this seemingly sadistically routed section of the AT.  Despite the rough terrain we were still averaging 15-20 miles a day, and finished the 100 Mile over the course of five very long days, which instilled in us a great sense of accomplishment right from the get-go. 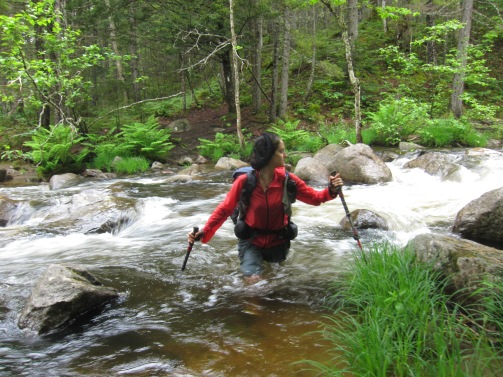 One of the fords early in the 100 Mile Wilderness

We have to be the first, if not the only, thru hikers to arrive into Millinocket via limousine.

A week before we had been lounging on an Amtrak bound from Charlottesville, Virginia to Portland, Maine.  That 24-hour train ride was followed by several bus shuttles to Bangor and then Medway, leaving us still  miles outside of Baxter State Park.  The following morning as we walked down Route 157, we were offered a ride into town, in a stretched Cadi nonetheless.  So at nine in the morning, Virginia and I stepped out of a white limo (complete with chrome wheels and “Just Married” scrawled across the rear windows) into the heart of Millinocket with our backpacks and trekking poles slung across our backs.  We spent a day in Millinocket wandering, eating, reading, checking over our gear, and getting prepped for the beginning of our trek.  The next day we hitched a ride into Baxter State Park with a 70 year-old native Mainer named Larry, who had been in the area his entire life and threatened, jokingly, to kick us out if we were Republicans.  We assured Larry that we surrendered to no political orientation.

An alpine start to Katahdin.

Once inside the park, we checked in with the rangers and settled into our lean-to which we had reserved months before.  At 3 a.m. the following morning, we awoke and set off into the darkness to summit Mt. Katahdin, the northern terminus of the Appalachian Trail.  The sky brightened as we approached treeline, and looking out over the land we stood in silence as the only two souls upon this mountain.  Dozens of lakes, ponds, peaks and ridges lay beneath us as the days first light spilled across the evergreens.  Onward we pushed, from steep trails to scaling boulders and navigating scree fields.  The final push to the summit consisted of a rocky field, passing by Thoreau Springs, and up, Up, UP to Baxter Peak, the famous summit best known for the wooden placard announcing “Katahdin” where thousands of weary hikers have posed for victory photos after walking over 2,000 miles from a small mountain just north of Atlanta, Georgia.  Atop the windy peak we snapped a few quick photos and made our way back down towards the campground, passing dozens of still sleepy eyed hikers who thought THEY were the first people up.  The next day, on my mother’s birthday, we began our walk South; into the 100 Mile.  She would have turned 64, the 18th day of June.

This one’s for you, Mom